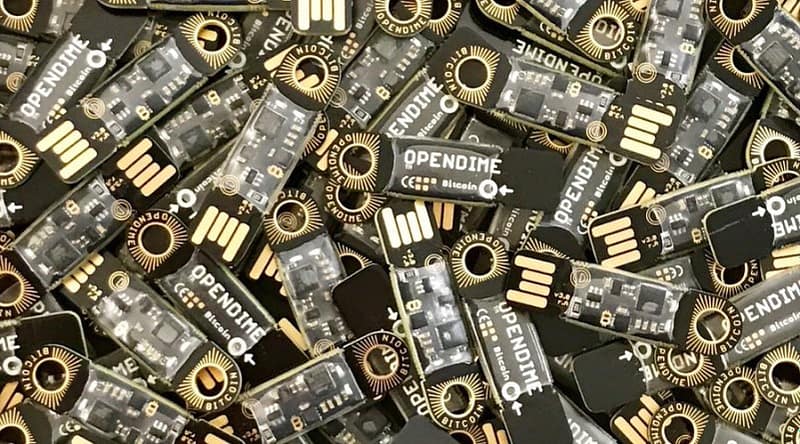 Everyone knows Trezor and Ledger. These Bitcoin hardware wallets – they support several altcoins as well – took on the market with innovative products and great marketing schemes.

But there are other hardware wallets that provide exceptional functionality and features that Trezor and Ledger just don’t provide.

That is the case of Opendime, which has one of the most interesting Bitcoin hardware wallets that allow Bitcoin enthusiasts to go dark.

While searching for Opendime, you might come across other hardware wallets and interesting product bundles with different names. That is because CoinKite, the makers of Opendime, are also behind brilliant products like Coldcard wallets.

Here are some basic distinctions that make both Opendime devices and Coldcard Bitcoin wallets complementary:

You can use Opendime as a stand-alone device or in combination with any other Bitcoin wallet in the market. Here are the features that make this device unique and help it cover a gap in the market:

These features allow Opendime to turn Bitcoin into cash. You can make transactions and purchases simply by passing the device with any given amount of Bitcoin, onto someone else.

The caveat is that you must trust the person you are dealing with. As long as you apply the same logic in an Opendime transaction as you do with a large cash transaction, you will understand how to be safe.

When used safely, Opendime bridges that gap between cash and Bitcoin in that it brings the cryptocurrency into the physical world.

These off-chain transactions can also contribute to solve scalability issues. Since the coins are not sent through the network, there is less throughput, allowing more Bitcoin to change hands without putting additional stress on the network.

Additionally, Opendime transactions are fee-less. Apart from the initial purchase of the device, people paying with an Opendime wallet will not incur in any additional costs.

In fact, the first person that initiates the payment using this device, bears all the cost, regardless of how many times the wallet changes hands afterwards.

Opendime devices do have a few shortcomings. Although they bridge the gap between Bitcoin’s digital-based transactions and the physical world, they are not entirely like cash.

Anyone receiving an Opendime wallet as a payment must keep the following in mind:

The device can be trusted because it generates its private keys in a decentralized manner, within the device when it is initialized. There are no traces of the private keys anywhere else except on the device itself.

The only way to reveal the private keys is by removing the transistor on the circuit, which generates a clear, visible change on the device itself.

Check this before you receive the payment.

You should also plug the device into a computer and check its public address. This will allow you to verify independently how many coins the wallet has.

Plugging the device into a computer does not compromise its security in any way.

Untraceable Transactions on a Device you can Trust

Provided that you use the device responsibly and you verify everything you need independently, Opendime is probably the best way to make untraceable, off-chain transactions.

The device is trustworthy, and although it doesn’t work exactly like cash, it is the closest equivalent to it in the world of Bitcoin. It is also cheap enough if you are thinking about larger transactions, which makes it a wonderful solution.