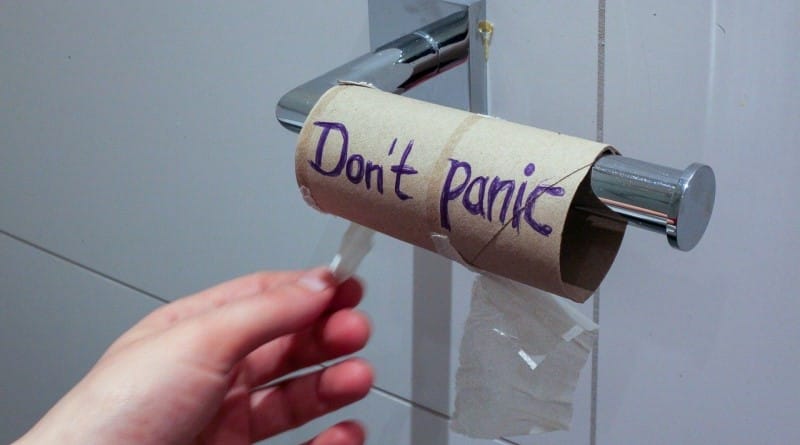 If Satoshi were launching Bitcoin during these troubled times, he would have included a message about toilet paper shortages instead of the one about the bailout from January 3rd, 2009.

Such are the times that we have fallen into complete disarray precisely when US and other world markets were celebrating the longest bull run in history.

It only takes one virus to throw the system off completely and show us what value really is.

Anyone looking for immediate utility, is heavily invested in essentials like food, soap, hand sanitizer and, perhaps notoriously so, toilet paper.

That is probably what inspired the toilet paper backed ERC20, TPC, showing us now what Satoshi was really talking about more than 11 years ago.

By now everyone is familiar with those empty supermarket shelves, toilet paper memes and neighbors stocking up on whatever they can.

It seems that the circumstances forced people to understand what their cash is really worth. They have decided that toilet paper is more valuable than bank notes, and they are right.

Without necessarily understanding complex economic theory and wording that can put pundits to shame, the average consumer reacted to a basic need: being prepared in case the situation took a turn for the worst.

Fractional Reserve Banking Does it Again!

Although some might not be able to articulate it using sophisticated language, everyone now understands that economies can easily spiral into hyper-inflation now.

Supply chains have been hit since the outbreak in China disrupted them and demand for certain items is clearly outstripping supply in supermarkets.

Central banks have responded with bouts of quantitative easing, repo market liquidity support and interest rate cuts. Just like in 2009 when Satoshi included that headline about that second bailout for banks in Britain, central banks are sprinkling free money on commercial banks and other financial institutions. This will:

There is no doubt than in times like these, people would love to have an asset linked to an underlying asset that is in high demand, unlike fiat.

That is the idea behind Toilet Paper Coin – TPC – a new project that popped up, promising to back their ERC20 with toilet paper roll deposits.

It is difficult to know whether the project is a hoax or not – it popped up too soon after the toilet paper shortages started spreading to take it seriously. But if it is a hoax, it might turn into a serious endeavor soon, once people start taking those dirt-cheap loans to the supermarket to buy toilet paper. The fiat price of TPC’s underlying asset can also skyrocket in the black market easily.

All Roads Lead Back to Bitcoin

Considering how this is all going, you would be better off trusting the Toilet Paper Coin project to keep a roll for you in Germany and give you the currency that you can convert back into toilet paper, than trusting all the zeros that central banks and governments are adding to the money supply.

Given reports of cash shortages emerging due to high demand from people living in the Hamptons – the 0.01%! – it would be sound to invest in something like TPC in the short term.

In the longer term, when people get into more debt, more money is added to the supply and rumors about cash withdrawals result in bank runs, your Bitcoin holdings will be the only viable alternative you have.

For everything that has happened since we were “… on brink of second bailout for banks” on January 3rd, 2009, one other market dynamic has been as constant as the sunrise: debt accumulation.

Satoshi warned us. Bitcoin was too late to save anyone from the 2008-09 meltdown, but now it is a whole different story. A BTC hedge now could be worth millions of devalued fiat in a few months.

In the meantime, if you are running out of toilet paper or any other essential, by all means, use your fiat first. At this pace it will become worthless soon and that is something that now everyone understands even if they cannot articulate it.