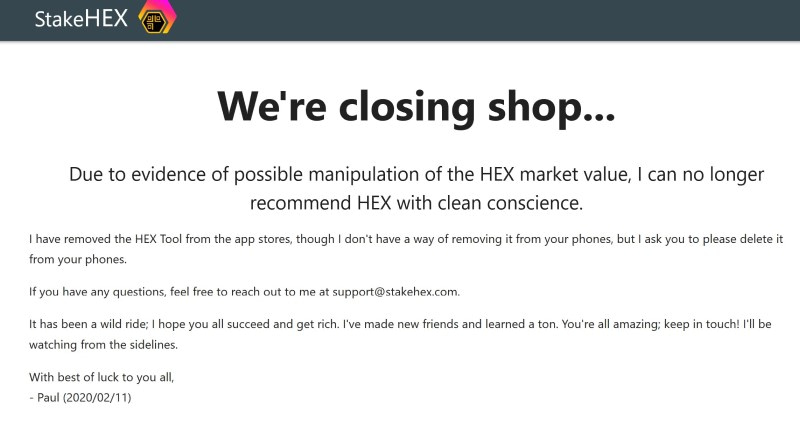 Richard Heart has managed to add another detractor to a long list of people calling him out on Hex. Paul, the owner of leading Hex affiliate, Stakehex.com, has officially quit on the new ERC20 token.

On his website, Paul says that there is evidence of market manipulation, which means that he can no longer recommend Hex.

1/ Hey, everyone; due to evidence I’ve seen of possible compromise of HEX markets, I can’t with clear conscience recommend HEX to anyone moving forward.

Market Manipulation in Crypto? You Gotta Be Kiddin!

Nevertheless, market manipulation seems to be the norm in crypto. This became evident following the fiasco of the ICO era.

Richard Heart’s manipulation of Hex markets shouldn’t have been a surprise; it should have been expected:

Can you Make Money on Hex Despite Heart’s Manipulation?

To be fair, we didn’t check whether Heart manipulated Hex markets or not.

We are basing our arguments on historical facts and the golden rule of capitalism: expect rational actors to act in their own self interest to generate profit for themselves.

The best part of this is that even if Heart manipulates the market, you can still make money on Hex. This is how:

If you take a look at the formula above, Hex is a net positive for you, no matter how much money you make on it.

Of course, when applying this formula, you are expecting to have enough people on the other side of the trade so they can buy what you dump. That makes you as much of a willing participant in Heart’s potential – and seemingly evident – market manipulation scheme as anyone else.

But you must be honest with yourself. After all, you are as much of a capitalist animal as anyone else. Richard Heart launched an ERC20 token that has absolutely no economic fundamentals to rely on.

The only factor that will allow it to make you money – like Heart would like – is the greater fool theory.

You cannot use Hex as a medium of exchange – at least not now. So, anyone acquiring it in the open market is doing so because they expect to get a profit out of holding a baseless ERC20 token.

Richard Heart said it Himself

Hex was simply not created to become a widely accepted medium of exchange. It was created to give people exposure to cryptocurrencies without having Bitcoin whales dumping on them.

This means Hex was designed as a crypto market gimmick and anything else it morphs into is a different story.

So, sorry Paul, we are not buying your sudden change of Heart – pun intended!

Anyone who is involved in this project at any level must be honest with themselves and should have seen Hex for what it is: an ERC20 lacking the economic fundamentals of a medium of exchange that will be widely accepted, that holders acquired with the sole expectation of making money on.