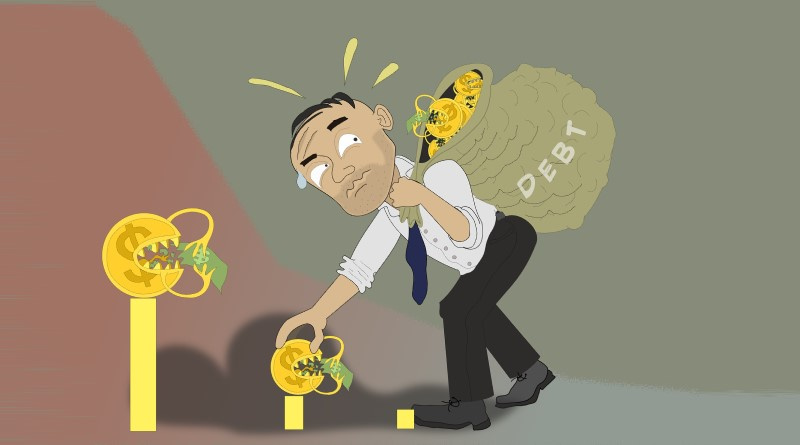 Looking at world debt is like watching a child playing with a wind-up car. Once they figure out that the more you wind the car the faster it goes when you release it, kids just wind more and more.

The problem is that they don’t necessarily realize that once they release the car, it will smash into a wall at high speeds. In some cases, if they keep on winding, they will push the mechanism beyond its resistance and break it.

The same is happening with world debt markets.

We keep winding and winding, treating them as a toy car, until someone lets go and we all get smashed, or we wind too much and break the whole system. Bitcoin is designed to keep us safe from reckless winding, so record debt levels are a definite buy signal for Bitcoin

So how wound up is planet earth? Quite a bit! According to CNN, before 2019 was over, world debt was close to $253 trillion USD. Just to put that in perspective, here is the nominal GDP of the 5 biggest economies in the world for 2018 – according to Investopedia:

These 5 countries make up approximately 53% of the world’s GDP; it would take them around 5 years and 4 months to pay the world debt if everything they produce goes towards debt repayment. If we include the rest of the world, that figure goes down to about 2 years and 9 months.

Those numbers are worrying. The world is straddling on a very fine line, trying to keep its balance. At any given moment, the weight of that debt could push a sector or a country far enough to trigger a domino effect.

Next thing we know, we either smash into a wall at a high speed or worse even, our winding mechanism breaks in such a way that no one can repair it.

But not all hope is lost. There is one economy in the world that has a 0% debt to GDP ratio: The Bitcoin economy.

It is also important to highlight the fact that this economy has no winding mechanism. Therefore, it is the only debt crisis resistant economy in the world and participating in it is easy.

Apart from being a debt free economy and one that you can participate in easily – no citizenship requirements – Bitcoin is also fairly big.

With a population of Bitcoin holders that is estimated to be anywhere between the population of Finland and Chile, and a market cap of more than $155 billion USD, Bitcoin is tantamount to a healthy, middle income country.

If you equate market cap to GDP – which is by no means a perfect comparison – Bitcoin is bigger than the GDP of Hungary was for 2018.

Bitcoin is an Innovation Driven Economy

Furthermore, Bitcoin is an economy that is heavily invested in R&D it is an innovation-driven economy.

Apart from taking the intermediary out, giving its users more financial freedom – financial sovereignty – and bringing forth the concept of an open ledger in which transactions are relatively cheap and fast, Bitcoin R&D has a lot more to show:

Don’t Get Wound Up, But Buy Bitcoin

These innovations are just the tip of the iceberg. It is clear that Bitcoin has a bright future to go along with that stellar debt to GDP ratio.

That is exactly why record world debt should push more people to consider joining the Bitcoin economy; it will be a safe haven if – when – that wound up world economy takes a turn for the worst.

Just make sure you don’t get wound up yourself if you want to buy Bitcoin. Buying Bitcoin through debt is risky but acquiring a few coins with your change – stacking Sats – or shifting some of your savings into Bitcoin can be wise.

The payoff will come when the planet has to deal with its ballooning debt.

*Note: This article is not meant to be financial advice of any kind. It is an opinion piece. Remember to always do your own research.