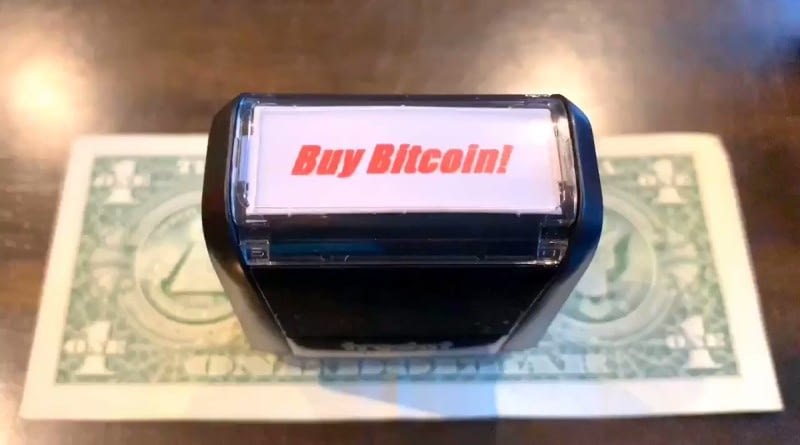 If you ever gotten a bill with a doodle on it, or perhaps some kind of cryptic message or even profanity, you will understand that the uniqueness of that note has its allure.

Given that bank notes with an additional message on them grab people’s attention, then stamping them with a “buy Bitcoin” or “Bitcoin is better” slogan, could capture the imagination of a nocoiner. Could this really increase Bitcoin adoption?

Stamping “Buy Bitcoin” on a Fiat Bill Might Void it

Stamping a fiat bill with a Bitcoin slogan might lead nocoiners to buy coins. After all, if you see it randomly on a bill, you might think that crypto is more popular than you previously thought. But, if you do stamp a bill with any message, whether Bitcoin related or not, you might be voiding that bank note’s validity.

Some countries enforce these regulations more forcefully than others. Nevertheless, it is still illegal to stamp anything on bills in most places. Maximalists who do not care about the bank notes might find it especially appealing to do something like this. After all, voiding a fiat bill is a tiny victory for those who think Bitcoin should replace fiat.

Another Form of Art

For the more artistically minded Bitcoin holders, emblazoning a cool Bitcoin slogan on a fiat bill might serve another kind of dual purpose. They would be able to promote Bitcoin through the distribution of that bank note and turn it into a nice piece of art – just like the Venezuelans who use Bolivars to make sculptures because the value of the bills makes them cheaper than other raw materials.

You can buy your own “Buy Bitcoin” stamp from CryptoEmporium.eu and start stamping all the fiat notes you want!

Get your “Buy Bitcoin” stamp >>

Either way, if you don’t care about the value of the bank note or you think you can add value to it with your art, stamping a Bitcoin slogan on it could be an effective guerrilla marketing tactic. Bank notes change hands quite a bit, despite the advent of cashless society mentality. In the UK for example, a bank note changes hands 147 times a year on average, according to The Guardian.

If you use the correct Bitcoin slogan, stamping it on a single bank note can expose your message to more than 100 people. Stamping ten already exposes your message to thousands.

Although these Bitcoin slogans stamped on fiat bank notes might not lead to a significant increase of Bitcoin adoption, they are a low-cost strategy for the masses. The only thing you need is a few bank notes that you are going to spend anyways and a sharpie. More sophisticated people will have their own “Buy Bitcoin” or “Bitcoin is Better” stamp, and others will take it a step further and photo-bomb Janet Yellen’s hearing in congress with a sign that says “Buy Bitcoin” to promote the mother of all cryptocurrencies using fiat.

It is all fair game as long as you are aware of the consequences. Hopefully, this strategy works and helps us achieve more notoriety.