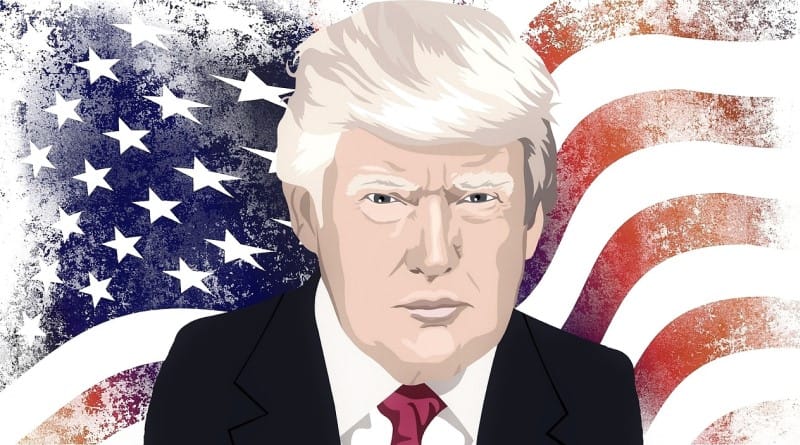 When you work for any company, upholding the brand is one of the unspoken norms you must adhere to. That is, if you want to keep your job. If you disagree with what that brand represents, you can either look for a different job, leverage your political power within the organization to change it without going out to the public, or you can denounce that brand anonymously, hoping no one figures out it was you. President Donald Trump just did his part to protect the brand he was employed to further: the US Dollar. He did that by criticizing Bitcoin and then Facebook’s own digital currency initiative, Libra.

Bitcoin is the Rare Focus of President Trump’s Twitter Rants

The president, who is well known for his Twitter rants, came out against Bitcoin in a strange string of tweets in which he also criticized Libra.

I am not a fan of Bitcoin and other Cryptocurrencies, which are not money, and whose value is highly volatile and based on thin air. Unregulated Crypto Assets can facilitate unlawful behavior, including drug trade and other illegal activity….— Donald J. Trump (@realDonaldTrump) July 12, 2019

This shows that Trump’s Tweets might not necessarily be about Bitcoin as much as they are about shoring up the US Dollar and making sure his followers understand that Facebook’s initiative might also undermine the standing of the US Dollar.

Here are some facts that people should take into account to try and understand what Trump’s intentions really are:

What to Make About President Donald Trump’s Bitcoin Tweet?

Given these facts and looking at them through the prism of the brand the US Dollar stands for and Donald Trump’s own aspirations, it is possible to infer that the president was reacting more to Libra than to Bitcoin itself. Apart from attempting to protect the US Dollar brand, it seems that the president has an axe to grind with social media corporations. It is also clear that he will take advantage of any opportunity he gets to pander to his base. Therefore, this tweet allowed him to hit 3 birds with a single stone:

Should Bitcoin holders be concerned about this tweet? Not at all. President Donald Trump has bigger issues to deal with. In terms of criminal activity, he must take care of how the currency he seeks to protect has been, and still is, the go to tool for criminals for decades.

President Trump, who is so worried about illegal immigration and drugs flowing north through the border with Mexico, should look at what flows south through the same border. Millions of US Dollars in cash, flow south into Mexico on a daily basis, fueling the drug trade. Trump has promised to build a wall along the border to stem the flow of drugs and immigrants into the US. But what is he doing to stem the flow of his beloved US Dollars – used to buy cocaine in the streets of America’s biggest cities – into Mexico?

Bridges, roads and smuggling routes on the US-Mexico border go both ways. US Dollars are used by both law-abiding citizens and criminals in multiple countries. Bitcoin is no different in that sense. Bitcoin flows freely online, smashing physical borders, and it is used by law-abiding people as well as malicious actors. The real issue here is that the brand the president advocates for, is much more widely used to commit crimes than Bitcoin.

Therefore, if Trump is serious about stopping crime and subduing Facebook, he will not focus on Bitcoin in the future. In any case, if he develops an appetite for Bitcoin bashing and comes after it with all the power of his office, he will helplessly enter a battle he cannot win. It is easy to predict that Trump will fail to stop the flow of US Dollars south into Mexico, as much as he will fail to stop Facebook’s Libra initiative. If he tries his luck with Bitcoin, he will find out that Bitcoin simply cannot be stopped. Nevertheless, it is safe to say that Bitcoin doesn’t care about Trump’s rants, and the president doesn’t really care about Bitcoin.