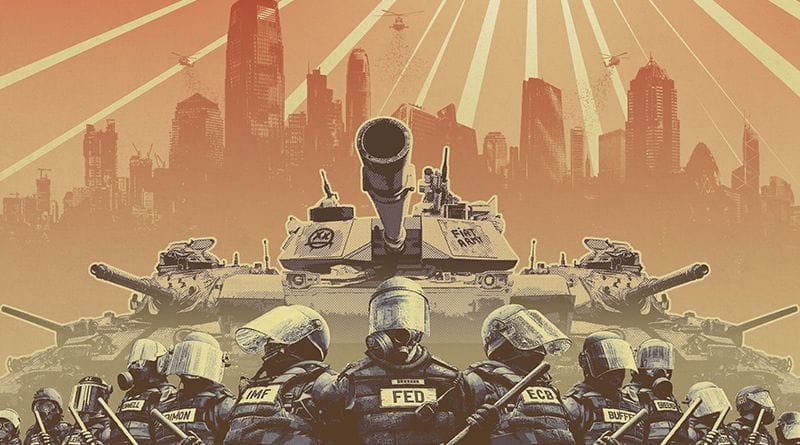 A subtle point can be incredibly powerful. When artists convey that powerful point with a masterful mix of style and composition, it becomes impossible to ignore. Bitcoin art often mocks fiat money. It rarely ever criticizes it in such a subtle yet poignant manner as CryptoRags’ work does.

One Look at “Bitcoin Above All” is Worth 1,000 Debates

“Bitcoin Above All,” CryptoRags’ masterful print, echoes the Constructivist poster style of the 1920’s. If  it looks like a poster from Soviet Russia in 1922, that is because there is a point to make.

The revolution against art that inspired Constructivism – art for the masses – should inform your approach to this print. It is time for everyone to understand that the fiat monetary system is broken.

The only way to fix it is with the kind of money that works for the people: Bitcoin

“Bitcoin Above All” Beyond Constructivism

Constructivism is not a random choice. Using Bolshevik artistic style to criticize the authoritarianism of the so-called capitalist system, is a double whammy.

Employing the artistic style that comes from the depths of the Soviet Union to drive a point about Bitcoin appears to be odd. But there’s a method to CryptoRags’ madness:

The imagery in the print helps us understand this:

While all these guns and bags of money are pointing at you, behind them you can see a bright orange Bitcoin in the sky. Your saving grace is right there, above all the arsenal that the fiat army can throw at you.

In the words of CryptoRags:

‘Bitcoin Above All’ depicts our favorite orange coin rising high above the perpetrators of monetary oppression. This work comes to life during what is easily the most difficult time the world has seen in the last century. Financial terrorism, rising global debt and excessive quantitative easing has wreaked havoc on the 99%. And yet, even while all the familiar systems continue to erode, Bitcoin only gets stronger, rising above all who oppose it.

“Bitcoin Above All” is a Limited Edition Print

This print is certainly one of the first of its kind. CryptoRags has effectively created a niche in Bitcoin art, one that has a subtle yet powerful point to drive home.

Unlike fiat, “Bitcoin Above All” is a limited edition Bitcoin poster. Only 100 copies will be “minted” if you will, in several sizes:

They all come with an independently verifiable, blockchain-powered certificate of authenticity and a corresponding QR code printed directly on the artwork for anyone to verify its authenticity.

“Bitcoin Above All” is not the only piece that CryptoRags has been working on. The artist has also designed T-shirts and is working on other pieces that promise to keep highlighting the virtues of Bitcoin.

If you would like to follow CryptoRags’ work or purchase one of the “Bitcoin Above All” limited edition prints, you can get in touch through Twitter. We are eager to see what CryptoRags will come up with next.