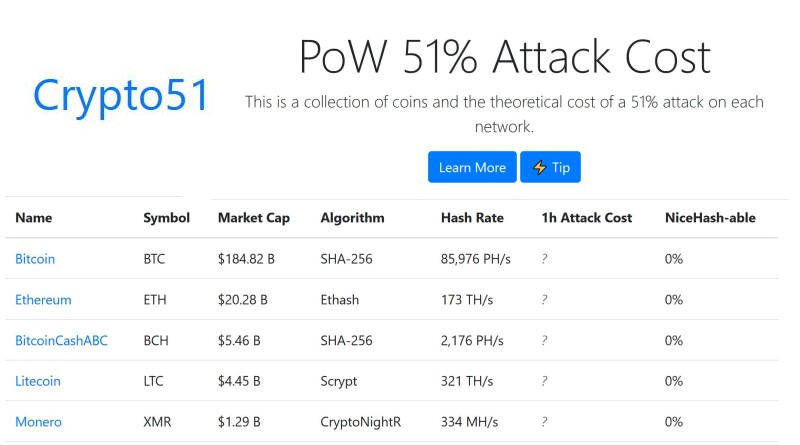 The dreaded 51% attack has been dismissed as purely theoretical many times. That is, at least, on Bitcoin’s blockchain. Other blockchains are much more vulnerable. But which are vulnerable, how vulnerable are they and how can an attack come through?

Crypto51: Calculating How Possible A 51% Attack Is

There are a variety of factors that go into a 51% attack. The data that Crypto51 gives you an insight into these factors. Some of these include:

The Surprising Data on 51% Attacks

The likelihood of such an attack depends on these factors and also on the profitability of the attack. Profitability is more difficult to calculate, but the data that Crypto51 provides, can give you an insight. If you take the data on Bitcoin for example, you will see that it is basically impossible to accumulate the mining power necessary to conduct a 51% attack on that blockchain fast enough to conduct the attack and make it profitable.

NiceHash cannot even provide 1% of the mining power necessary to conduct a 51% attack on Bitcoin, which is a testament to the security of that coin. Furthermore, according to the data provided by Crypto51, if anyone wants to attack Bitcoin, they would have to run so many ASIC miners simultaneously, that it might take years to organize such an attack. Not only will the mining targets move by the time the attackers are ready to launch, but the sheer cost of accumulating that kind of mining power can easily surpass the potential reward for such an attack

Therefore, a decision on whether to attack a blockchain or not, is a purely mathematical question. It is based on game theory. Nevertheless, there might be malicious actors who are willing to take a huge hit to attack a coin. The data from Crypto51 shows that is much more likely as you move down the data set. In fact, one of the biggest coins out there was already attacked. Bitcoin Gold, currently ranked 10th on Crypto51’s data set, was attacked and $18 million dollars were stolen.

The Formula to Prevent 51% Attacks According to Crypto51

If that happened to Bitcoin Gold, it might happen to other notorious coins out there. So, how do you prevent attacks? Crypto51 has some suggestions, which are especially relevant to new projects out there:

In other words, Crypto51 shows that if you are not Bitcoin, and cannot accumulate a massive amount of mining power in a short time, your vulnerability to a 51% attack starts becoming relevant. Just a few coins down that list, vulnerabilities might already be critical. This is a very valuable piece of information when you choose which coins to trade for and which to hodl. From the gist of this article, you should be sure about which kind of coin we are hodling hard!