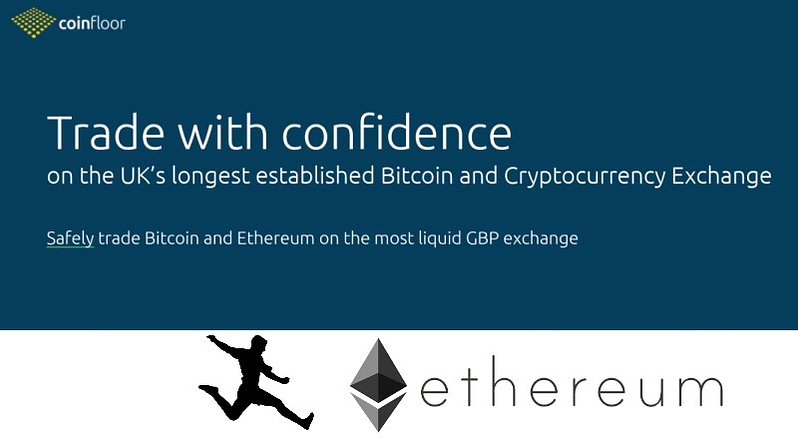 Despite the sheer abundance of exchanges out there, in-depth knowledge about how their business works is still scant. Every now and then, we get a glimpse.

This time around, our small yet informative insight comes from a move that most would think is unusual. Coinfloor delisted Ethereum and Bitcoin Cash, choosing to specialize in Bitcoin only.

Coinfloor is the oldest exchange in the UK, specializing in providing a crypto gateway to British Pound holders.

One would think that its tradition and knowledge of the market would give Coinfloor every tool necessary to offer many other cryptocurrencies to the British public besides Bitcoin.

But the exchange business is far too complex for anyone to make such an assumption.

When it comes to exchanges, volume is the first thing that management looks at. If there is not enough trading volume on a given coin, then supporting it on the platform might not be worth it.

That is what Coinfloor cited as its reason to delist Ethereum after delisting BCH.

In advance of the 11th anniversary of #Bitcoin, we have some big news to announce today! 🎉

From 3rd January 2020, @Coinfloor will be focused on providing Bitcoin only services!

For more information, please check out our blog post: https://t.co/Myip75Zs74

According to Coinfloor, Ethereum volume was too low to keep its support team up to date with the myriad of changes ETH will go through over the next few years.

Ethereum is looking to phase out of its PoW algorithm and implement a PoS one. That change will require quite a bit of updates along the way and it will take time to be completed.

Any exchange that cannot keep up with these changes as they happen, risks the safety of the funds on the platform and its relationship with traders.

Bitcoin is already a good solution to the problem. Everything else is cream on top of the coffee. It is already solving the problem today.

Coinfloor’s Announcement: Beyond the News

With 24-hour volumes of around $450,000 on its BTC/GBP pair, Coinfloor is not considered to be a big exchange. Nevertheless, it is one of the most reliable platforms to trade Bitcoin for Pounds and vice versa.

It is regulated in the UK and has a good record, but its users have been concentrating more and more on Bitcoin as opposed to the other cryptocurrencies that Coinfloor offered.

This decrease in demand is quite telling. A well-established exchange has enough customers to run on a single exchange pair.

It leaves a more diverse cadre of currency pairs to bigger exchanges and to those that are not as well-established in the industry, pointing towards a bigger shift within the exchange sector.

Finally happy can announce that @Coinfloor will be focusing on #Bitcoin, the world’s leading cryptocurrency, from the 3rd of January which is also it’s 11th Anniversary!@nic__carter @Excellion @lopp @adam3us @coinscrum @saifedean @BTCVIX https://t.co/QRYPgfIXDp

Play to its Advantages

Smaller exchanges or those that are still looking for proper licensing, are willing to offer a wider range of cryptocurrency pairs to attract users.

That is part of the costs these platforms incur in, to compete in a space that is saturated with supply.

If Bitcoin dominance increases and there is less trade on other cryptocurrencies, these smaller exchanges benefit when well-established exchanges like Coinfloor delist coins.

They play to their advantages just as Coinfloor is playing to its advantage.

On the other hand, Coinfloor cited a decrease in interest for Ethereum and BCH trading. Given that this is the oldest cryptocurrency exchange in the UK, it is safe to assume that some of the earliest adopters in the kingdom are its customers.

They have seen enough market cycles and understand that Bitcoin, despite its weaknesses, is the most viable cryptocurrency out there by far.

Markets have reinforced that notion, even through speculative trading. Bitcoin’s dominance – Bitcoin’s share of the total amount of money invested in cryptocurrency – has increased throughout 2019, from around 52% to a peak of above 70%.

Bitcoin dominance currently sits at around 67%, with prices falling.

Coinfloor’s move to delist Ethereum and focus on Bitcoin only suggests that the movement in the market towards increased Bitcoin dominance is not an anomaly or a result of speculation.

One Coin to Rule Them All?

As Coinfloor gets ready to celebrate Bitcoin’s 11th anniversary, on January 3rd, 2020 by delisting Ethereum, it seems that diversity in the market is shrinking even among high market cap cryptocurrencies.

If this trend continues, all the exchanges that are betting on listing as many cryptocurrencies as possible to establish a client base, might face the same fate of the smallest coins they list.

After all there is a chance that there really is only one coin to rule them all, or at least, one coin that is clearly in control of the market: Bitcoin.

Those who offer a reliable exchange service on Bitcoin/fiat pairs like Coinfloor, might have a better business case in a world of increasing Bitcoin dominance.