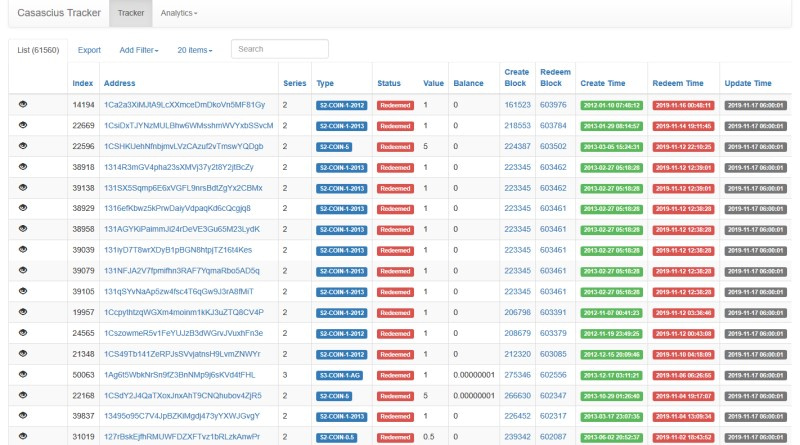 To redeem or not to redeem? That is the question! Casascius coins are coveted collectibles for a variety of reasons. Mainly, they are loaded with sizeable Bitcoin amounts given current price, and Mike Caldwell stopped producing them in 2016.

One thing is clear: before you buy one of these coins, you must understand if the Bitcoin is still loaded or if the previous owner redeemed. That is why the Casascius Tracker is such an important tool. It might also help us understand some trends regarding “old money” vs “new money” in the space. Here is how this tool works and how you can use it to help you decide whether to buy one of the coins second hand or redeem its Bitcoin value if you already have one.

This great coin tracker was made by Ludvig Manukyan, a network engineer and Bitcoin artist. There are many features on the Casascius Tracker that will allow you to understand the market for these iconic collectibles and might give you a hint about the trends in the market. The Casascius Tracker offers the following information:

Figuring the Market for Casascius Coins and Bitcoin

The most straight forward use case for the Casascius Tracker is to understand which coins have been redeemed, which helps prospective collectors. Nevertheless, the data that this tracker produces is incredibly rich and insightful. It could help more sophisticated data analysts to understand how “old money” and “new money” behave in the space to a certain extent.

There are indications there to suggest that some old-time holders are definitely keen on redeeming. If you can combine the data on the Casascius Tracker with Bitcoin price data, you might find some interesting patterns that can you can develop into market signals or key indicators.

So, Should I Redeem or Should I Buy More?

But the data itself will not give you a conclusive answer on whether you should redeem, keep your Casascius coins intact or even buy more. From a Bitcoin price perspective, it all depends on all the data you follow. A single source of data should be taken as just another tool in your decision-making toolbox. For collectors and hardcore hodlers, redeeming a Casascius coins could be seen as a sin, no matter how high or low current Bitcoin prices are.